About two hours before this posting, a fire hit in two barangays in Metro Manila. A week before, one blaze destroyed hundreds of houses  in Cebu (one barangay away from our house). And in less than three months prior to the incidents, a fire broke in our neighborhood one early Thursday morning. 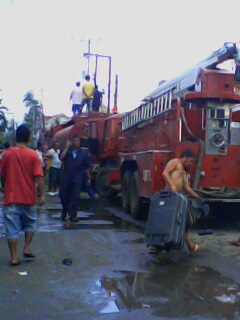 Even months before the Philippines celebrates the Fire Prevention Month, a series of fire incident has been recurring in the country, and in my situation—in places near my residence.

A fire broke out at 1 a.m. in our neighborhood. The house that was blazed is just a firewall away (kung pwede ra mutambling mao na ka duol)

It was my first day back in Cebu from South Korea. All I ever wanted is to rest in my nest after nearly 16 hours of travel. I was so relieved to know that I would at last have a time to sleep all I want. Yet hours after my sweet sleep (nap), a sound of banging alarm woke me up. I heard people shouting for help, I heard footsteps quickly moving. I closed my eyes for some seconds and composed myself. I opened my eyes and listened to what the people were yelling.

SUNOG!!! (Fire) I heard plenty of voices shouting altogether. I was refreshed and got out of my bed, grabbed my luggage (which I haven’t unpacked yet) and called for the other members of the family. We all rushed outside the house looking for the fire. Our neighbors started to bring appliances and other important belongings outside. I didn’t know what to do. I was shocked. I still couldn’t absorb everything that is happening. Was I only dreaming? Should I go back to sleep and then wake up and everything will be alright?

Minutes later I heard the fire truck coming, it’s almost near. I continued my prayer. Checking for my family members I called my mom, sister, brother, and father. But my father wasn’t with us. I searched for him. I went back in the house to see if he’s there because I was sure I pulled him out of his room to go to a safe place. Yes, I found him sitting inside the house fearing to loose everything he has put up for years. He said: “bantayan lang naku atong butang day kay maunsa nya ni, dili lagi maapil sa sunog atong balay.” I forced my father to leave it behind but I failed because he has been so attached to his belongings that he finds it hard to turn back from it.

Lord willing the fire didn’t spread to other houses because of the fire wall that separated the area. My father never left the house still.

The consecutive fire incidents that happened have damaged millions of properties and caused thousands of lives to live a whole new way. It is a disheartening experience to see one’s possessions burnt down little by little in just minutes, yet it took him or her months, if not years, to establish.

Seeing from the faces of those who lost the place they call home, it reminded me of how my father looked like during a nearby fire alarm. Looking at my father struck me with one realization: Life is precious and nothing in this world could ever compare with it. I am overjoyed to know that most people chose to save their lives and not their belongings.

It is undeniable that sometimes we feel attached with the worldly things and forget about what’s truly important. We fail to see the beauty of every incident and recognize it as a blessing instead of disaster.

Rather than feeling pity over those who lost their homes, I  see them as life warriors–those who view life positively: “habang may buhay, may pag-asa.”

For those who were spared with this kind of calamity, may we keep in mind the safety of daily living and try to prevent it from happening—because in the end, the choice is still ours.

As the Fire Prevention Month is launched today (March 1), may we always be reminded to check everything that could ignite fire–like what they say:  ” prevention is better than cure.”  ^_^   (To know more about fire safety tips visit the Bureau of Fire Protection –click on the name)